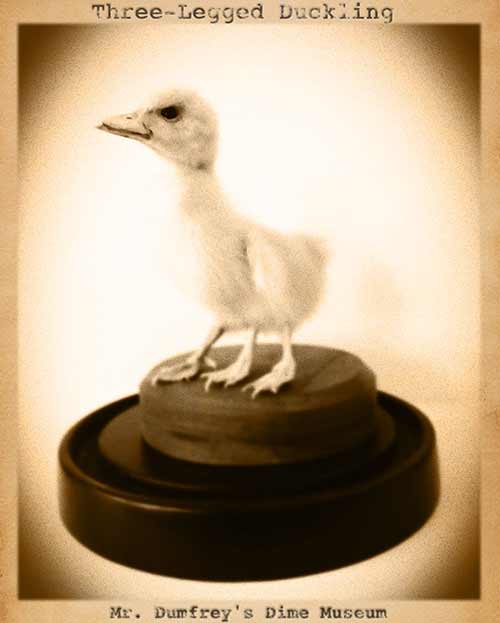 Of this three-legged duckling there is very little to tell except that it came to us from the farmer on whose land it had been born. This was a Richard Alberblatstz of the Plattskill Alberblatstzes, a hard-working fellow but perhaps a little slow--and not, in fact, very suited to farming. Mr. Alberblatstz was too soft-hearted, too distractible, too prone to flights of fancy and periods in which he would do nothing but lie on his back and contemplate the clouds drifting by. In particular he loved birds, especially the family of ducks that lived on the pond across the road from his property.

On one of his daily walks he heard a commotion from the water. Curious, he approached the edge of the pond, only to see the strangest thing: a tiny, three-legged duckling being attacked by its older siblings, who were attempting to drown it. As he had been born with a large birthmark in the exact shape of Florida, splotched across his right cheek, and had endured plenty of teasing from his childhood classmates about it, he ran forward to help the deformed duckling.

He rescued the little duckling and carried it home. His wife was delighted by the oddity of the thing, as were his children, who named the bird Trinity and cuddled with it in their beds at night. The bird was a reminder, Mrs. Alberblatstz liked to say, that all things were beautiful before God.

The next winter the snows came hard in October and did not stop until nearly May. In the meantime Richard Alberblatstz discovered that due to some error on his part, all the potatoes were infested with rot, and come February his children were in danger of starving. His wife handed him a rifle and instructed him to kill the ducks on the pond. Though it hurt him to do it, he didn’t hesitate. He would have done far worse for his family.

Of course they would never have dreamed of hurting Trinity, the three-legged duck, who by then was a member of the family. And so in the end the deformity that had nearly cost the duckling its life instead saved it from ending up glazed with honey and served on a roasting platter.