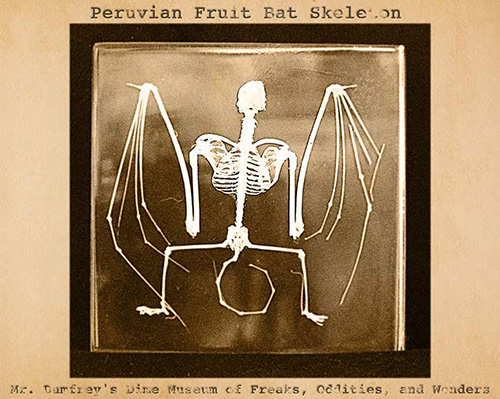 What you see before you is no mere skeleton, and no mere fruit bat. In fact, it is no fruit bat at all.

It is all that remains of the most famous, and famously tragic, vampire in all of Europe: Prince Peter das Lágrimas of Portugal, also known, on this continent, as Peter of the Tears.

No one knows exactly how long Peter had been alive when he met the young Donatella Delanostre, or how he had accumulated his vast wealth. He was at least several centuries old by the time the real story begins, in 1775, and was known for his vast appetite for blood and also his extremely lavish style of entertaining, which ensured that even many of his victims remained his friends.

All the townspeople kept watch on his castle, knowing that as long as the music flowed down from the hill, as long as lights still burned in the windows, the party went on and they were safe. But as soon as the party was over, Prince Peter would descend with a ravenous hunger and prey on the people, and they were powerless to stop him.

It is likewise unknown when and how he first met the beautiful Donatella Delanostre, the lovely and modest orphaned daughter of a milliner. It was said that she was so sweet that a single word from her lips could turn a vat of blueberries to jam. And in fact she worked in a pastry shop, and her pastries were the best in the city, possibly the world, so perhaps it is true.

All that is known is that as soon as he saw Donatella, Peter began to change. He took pains to make sure that his dress was impeccable, and to remove all evidence of bloodstains from his linen shirts. He developed a seeming fascination with pastries and passed by the bakery nearly every night, where he often appeared to do nothing but stand in front of the display window and puzzle over the almond cakes for hours at a time. He stopped hosting parties and fired all the musicians except one, a cellist, who played the same love song every night, a song so full of longing that grown men, hearing it, stopped and wept in the street.

In short, he fell in love.

Somehow, he won Donatella over. The gentle orphan, who frequently stopped to rescue ladybugs from the street and passed through the city feeding stray cats with leftover pastry scraps, fell in love with the most fearsome vampire Portugal had ever seen, and at night they were often seen sitting side by side on a park bench, her blond head resting on his shoulder, his white hand caressing her cheek. And yet, gentle soul that she was, she could not bear the idea that in order to be together, she would have to become this terrible thing, the blood-feasting monster.

Vowing to prove to her that he could change, Peter foreswore the taste of blood altogether and began drinking the nectar from a variety of night-blooming flowers the fruit bats favored, thus earning his second nickname: the Fruit Bat of Portugal. Still Donatella could not bear to join his side as a vampire. But even as he withered away, she grew old and withered too, since she had sworn she would never love anybody else. After Donnatella died, Peter spent the final years of his life as a fruit bat, too weak and heartbroken to change form.