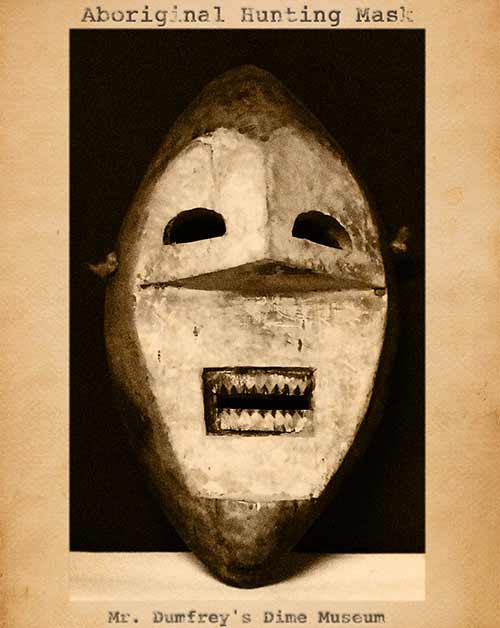 A story about this mask:

A girl was born too soon. Her mother wasn’t expecting her, but knelt down anyway and her husband held the woman steady until the baby came. They named her Kirra because she came as quickly as fire through the brush. As she grew older they kept calling her that because she was trouble. Kirra was not interested in the plantings and diggings of the women. Lizards and small birds didn’t make for interesting prey. Instead she would sneak out with the men on the long hunts, hoping to learn how they brought down the great emu: birds as big as men with sharp beaks and strong legs. She never made it far. Sometimes the men would pretend they couldn’t see her creeping along behind them, but they always sent her back before they'd gone too far from the village.

It wasn’t fair. Boys her age were allowed to go. They got fierce tribal hunting masks designed to frighten away the ghosts, demons, and angry spirits that inhabited the surrounding wilderness. They came back with stories of giant kangaroos and enormous insects. So Kirra began to fashion a mask. Perhaps, she thought, if they see delete wood and began to carve her fearsome new face. She made it a flat face. A plain face. A face of death. She gave her new face sharp teeth that would rip any ghosts to pieces.

A boy saw her working on the mask. He liked it, and asked if he could have it when she was done. She told him no, and the boy began to cry. The men thought he was weak. He had hoped the mask would show them how fierce he really could be. Kirra felt pity for the boy, so she let him have the mask and decided to make a new one for herself. But again, a hunter asked her for the second mask, to give him courage for the hunt.

Word of Kirra’s masks spread. It was said that they were the fiercest. It was said that demons would run so far from them that an entire week-long hunt could be protected. Men began to bring her materials to use in her mask-making. Pelts from kangaroos. Feathers from the huge Emus. Finally Kirra's masks became so famous, that men would hunt each other just for the chance to possess one. And then she stopped making masks and, with this, her last and final mask, went on a long adventure. When she died of old age she was wearing the mask and it was said they found her smiling underneath.