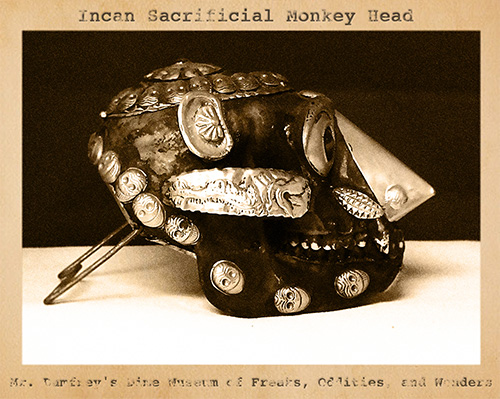 In the year 1856, a young Mexican boy named Diego Montero, who had just had his tenth birthday, was wandering around the outdoor market in his hometown when he spotted a strange object on the table of an wrinkled old woman.

It was the skull of what appeared to be a tiny man, decorated with all kinds of silver ornaments. When Diego asked about it, the old woman explained that it was actually the skull of a sacred golden monkey from the long-vanished Inca empire. It seems that, many hundreds of years ago, the Inca sent out all the young men in the land and tasked them to capture a golden monkey. The young man who brought back the largest monkey was rewarded with what the Inca considered a tremendous honor. He was taken to the temple and sacrificed to their main god, Tzotchkecola.

Eventually, the leader of the Inca, King Qztklitlnicl, noticed that he was having trouble finding soldiers for his army because so many young men were being sacrificed. What to do? After giving the matter much thought, he had a brainstorm. Instead of sacrificing the young men who captured the biggest monkeys, why not sacrifice the monkeys? This idea met with great approval among the young male population of the Inca empire. The monkeys weren't so thrilled, but there was nothing they could do about it.

The old woman finished her story by telling Diego that the beautifully decorated skull on her table was the head of one of these ancient Incan sacrificial monkeys. It had been in her family for many generations, but she badly needed money and had decided to sell it. After Diego bought it, she mentioned one last thing: the monkey head would grant its owner three wishes. As Diego hurried away with his new prize, the old woman called something after him but, in the noise of the marketplace, he couldn't hear what she said.

Now it so happened that Diego, who was very small for his age, was the favorite target of a bully named Jorge Rivera. This had become such a big problem that Diego dreaded going to school. As he sat at dinner that night, looking very glum, his mother asked what was wrong. "I wish I didn't have to go school tomorrow." To his surprise, his mother let out a laugh. "Silly boy," she said. "Did you forget? Tomorrow is the holiday of Cinco de Mayo. School is closed!"

Back in his room, Diego gazed at the monkey head and wondered if what the old woman had said could possibly be true. Could the head really grant three wishes? He decided to test it. Closing his eyes, he said aloud: "I wish I were stronger than Jorge Rivera."

When he awoke the next morning, he leapt out of bed and ran to the mirror, hoping that his wish had been granted and that his body had become big and muscular overnight. Much to his disappointment, the Diego that looked back at him was the same skinny little boy as before. Disappointed, he went into the kitchen for breakfast. To his surprise, he found his mother looking very sad. When he asked what was the matter, she told him that she just heard from a neighbor that one of his schoolmates, a boy named Jorge Rivera, had been kicked in the head by a mule and was now in the hospital, unable to move a muscle.

Diego was so shocked he could barely eat his breakfast burrito. He felt awful. Had his wish caused this accident? True, he didn’t like Jorge Rivera. But he certainly didn't want him so terribly injured that he couldn't move. The moment he was done with his meal, he got the monkey head from his room and ran to the marketplace. Finding the old lady, he told her what had happened.

"Didn't I warn you?" she said after heating his story.

"As you were running off, I called out to you."

"I couldn't hear you," said Diego. "What were you calling?"

"An old proverb. 'Be careful what you wish for. You may get it.’"

Diego thought about this for a while. Then he said. "Well, I still have one more wish. And this time, I want it to come true."

"Go ahead," smiled the old woman.

He closed his eyes and spoke his wish.

One week later, Diego came home from school. His clothes were all torn and he had a black eye and a bloody nose, as if some school bully had just beaten him up. His mother was terribly upset but Diego was smiling. Everything was back to normal.