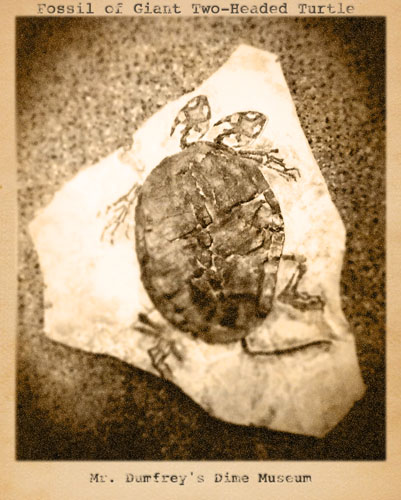 The most fascinating aspect of the fossilized two-headed turtle, a highlight of our Weird Natural History Through the Ages exhibit, is that it might not have come to us at all were it not for the longstanding rivalry between a Miss Amelia Firestone and her brother, Jeremiah, who lived in Boston at the turn of the last century.

Jeremiah was, by all accounts, a brutish, blunt-headed, stupid boy, with hands like two shovels and a nose that resembled a squash blossom. But his parents doted on him, as parents tend to do, blinded to all of his many faults; while poor Amelia, who was smart and brave but also slightly small for her age and, well, a girl, went almost completely unnoticed. She was constantly showing up to dinner and finding that three and not four places had been set, and the only person who ever remembered her birthday was the cook.

Jeremiah, however, got heaps of gifts at Christmas and on his birthday and sometimes for no reason at all. His father, Jeremy, had made a fortune manufacturing bitter licorice sucking candies and selling them to overburdened parents by promising that the mere threat of one would render their children totally silent. He had bought his son Jeremiah several bicycles, hoop-de-hoops, and exploding snaps, every kind of spring-powered toy there was, and even a model steam-engine train, which chugged around Jeremiah's palatial bedroom on model tracks through model woods and mountain lands and miniature towns filled with miniature people, before stopping at the closet in which Amelia kept her bed.

And now, as Jeremiah's birthday approached, his father found himself with a problem: what to get his son that his son did not have already?

The answer came in the form of a beautiful, rare, two-headed turtle, the only one of its kind in the world, which Jeremy purchased at an exorbitant price. In fact, he paid the ultimate price: He sold his own daughter to a toy factory in exchange for the two-headed turtle.

Amelia was not actually that unhappy once she was carted off to the toy factory. She was with girls her own age and the owner, Eloise Matlock, made beautiful, wonderful toys, with moving parts and mouths that whistled and eyes that blinked and opened. She taught every girl her special brand of magic, and ensured they went to school, had plenty to eat, and had time to run around and play whenever they wanted. It was better, certainly, than living in a closet at home, especially since late at night Eloise Matlock would wind all the toys and set them marching through the factory or play music on the piano and command them to dance. But Amelia hated to think of her brother and that poor turtle, and how he must surely be torturing the animal, and so one day she snuck back home and stole the two-headed turtle from its crate. It was indeed being abused and neglected, since Jeremiah never took interest in any new toy for longer than a day, so Amelia freed it in a park in the center of Boston.

And Jeremiah chocked on a licorice sucking candy at the early age of thirty-three.