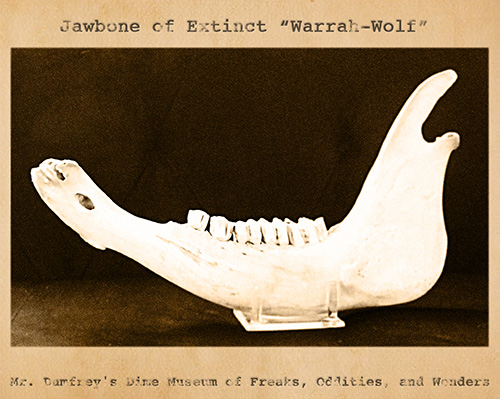 When it still walked the earth, The Warrah went by many names. Some called it the Falkland Islands Fox, others the Antarctic Wolf. Its scientific name is Dusicyon Austrlis, which means the foolish dog of the south.

Common belief says the animal was so named because its overly friendly nature towards humans led over-hunting and eventual extinction. We at Mr. Dumfrey's, however, know the true story of a very foolish Warrah, (whose jaw-bone you can see before you) that gave his entire species such a silly reputation.

The Warrah in question was an orphan named Wally. Wally, like many fox-like creatures, loved to think of himself as a trickster. Unlike most foxes, he was so clumsy, so distractible, and overly trusting that daring him to do various foolish things became a popular game among his friends.

There was an Old Warrah on the island, whose husband had died and left her with many pups to take care of. She had the most lovely spacious den out of any Warrah, but had a fierce temper. All the young Warrah were frightened of her.

"Wally," the fool's friends said to him. "We dare you go into Old Warrah's den, and pretend to be one of her pups."

"Easy!" Wally said. "For I am small, and innocent of face." He ran over to her den, and his friends laughed themselves to sleep thinking of how the Old Warrah would snarl.

Wally went into the den and found all the pups asleep for the afternoon, the Old Warrah watching over them with her eye half cracked open. Wally tip-pawed into her den, giggling to himself as he lay down amongst her pups.

Strange boy, the Old Warrah thought. When she woke up at night to find him still there she thought again, strange boy. When he woke up with the rest of her pups and called her mama she found him even stranger.

"Okay son," she said. "All my pups have to work for the family. Why don't you go find us some dinner?"

"Yes mama!" he said, grinning broadly at what a good trick he was playing. He spent the day killing birds, enough to feed not only himself but his new family as well. The whole time he laughed, thinking that he was the best prankster of all time. For months, Wally's friends waited for him to be violently kicked out of the Old Warrah's den, but he was such a good hunter, that she decided adopt the strange boy as one of her pups and let him stay.

The story of his foolishness spread, and everyone laughed and smiled at Wally as he ran by, but none laughed or smiled as much as he did, thinking he was the best joker to have ever lived.